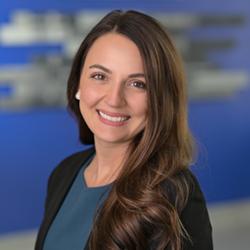 In 2013, she earned her bachelor’s degree in Communication with a minor in Sport Management from The University of Akron. Prior to joining UWSM, Kerri worked in sales for the Cleveland Cavaliers for four years. A few of her fondest memories working for the Cavaliers include seeing Lebron’s return to Cleveland and, of course, winning an NBA Championship.

Kerri was born and raised in Northeast Ohio. She currently resides in Cuyahoga Falls with her husband Cameron and their two dogs Eli and Elle. In her spare time, she enjoys spending time with family, traveling, attending sporting events (Cavs, Browns, Guardians, Rubber Ducks & Zips) and staying active through running and fitness classes.