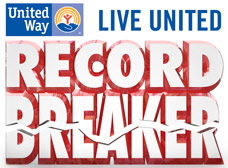 United Way of Summit County announced today that the 2014 United Way fundraising campaignraised $12.75 million – the largest amount in the organization's 96-year history. This total raised by the community is just $50,000 short of the $12.8 goal set in July of last year. United Way officials hope to announce by the organization’s annual meeting on April 22 that the entire goal has been met. Last minute gifts are sought to put the campaign over the top. Donations can be made atuwsummit.org/give/.

This is the fifth consecutive year the charity has set a fundraising record. Donations in 2014 topped the previous record set in 2013 by $550,000.

“It’s been a privilege to chair the 2014 United Way campaign,” said Ted Walter, United Way campaign chair and Fifth Third Bank’s city president for the Akron, Canton and Youngstown markets. “Our record-breaking campaign results signal continued strong support for United Way’s investments in critical and strategic initiatives that are essential to advance the common good in Summit County, Thank you to everyone who contributed to this year’s campaign, and to our campaign volunteers and the United Way staff.”

“Because of the generosity, compassion and support of thousands of people in Summit County, United Way's annual fundraising campaign continues to achieve unprecedented growth,” said Katie Rennard, United Way’s senior vice president of resourcedevelopment. “By supporting United Way, individuals and organizations know they are changing lives and making a positive impact in our community.”

The process for investing funds raised in United Way’s impact areas of education, income, health and basic needs has already begun. United Way review teams are comprised of volunteer impact area experts and United Way board members with particular interest inthose areas. The review teams look for quality programming and results, integration of services and collaboration with otherorganizations, and leverage through matching funds as well as alignment with United Way’s investment priorities. Allocation results will be announced soon.